This is the first in a multi-part series that will show how to easily get Kubernetes up and running in Windows and deploy a sample application. Almost everything also applies to Linux, MacOS, etc.

The source code for this example can be found at https://github.com/cleverswine/hello-k8s-win

These posts are based on an intoductory presentation that I gave to my company.

Requirements for the Sample Application

Docker gives us the ability to “containerize” our applications.

(from docker.com) A container is a standard unit of software that packages up code and all its dependencies so the application runs quickly and reliably from one computing environment to another. A Docker container image is a lightweight, standalone, executable package of software that includes everything needed to run an application: code, runtime, system tools, system libraries and settings.

Facilitates use of microservices architecture

Startup is significantly faster than a VM (ephemeral workloads)

Kubernetes (k8s) is a platform for automating deployment, scaling, and management of containerized applications.

Pod: A Pod represents a unit of deployment: a single instance of an application in Kubernetes, which might consist of either a single container or a small number of containers that are tightly coupled and that share resources.

Service: A Kubernetes Service is an abstraction which defines a logical set of Pods and a policy by which to access them - sometimes called a micro-service.

Architecture of a Kubernetes Cluster 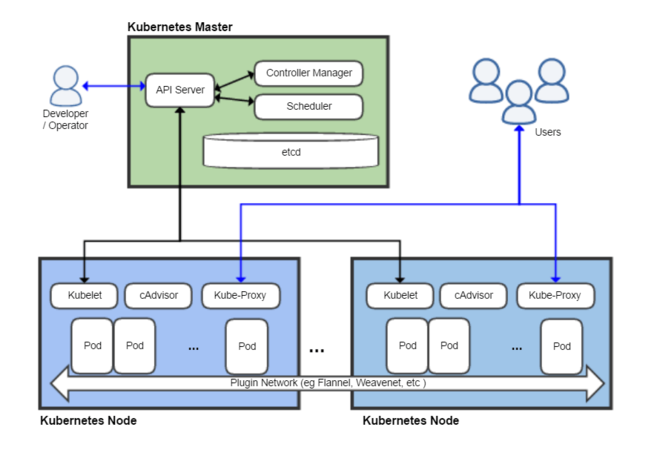 How to get Kubernetes

For developers: Minikube, Docker Desktop, and many more.

Kubernetes and the Sample Application

What types of build artifacts do we need for each application?

How do we interact with Kubernetes?